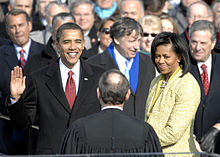 We the people can now declare what has been obvious for years with the birth of our elitist "do nothing Congress," that on January 20, 2009, this democratic nation awoke from a slumbering sleep to realize that we are no longer a nation divided purely by race and culture, especially among the modern-minded free people of today. But, someone forgot to inform the "old guard" in Congress that America is changing and the faces that once occupied the White House, just got a little darker, smarter and wiser. Unfortunately, it took the election and ultimate disdain of our first African American president to bring this truth to the surface. Today, all of the world can stand-up and take notice of the following fact; "the relevant power...does not reside in the political system, but in the private corporations that finance and manipulate the politicians."
Here's the proof! In December of this year, thousands of war veterans are coming home, and after the Ticker Tape parades, great speeches, they will join the many unemployed Firefighters, Police Officers and Teachers, being terminated across this country. It doesn't matter the uniform, or the service rendered to this nation, the prosperity of the working class now depends upon the "good fortune and light taxes" of corporate billionaires. They say: it's Obama's policies, but this has proven not to be true, especially with the introduction of the "Americans Job Act."
This jobs plan provides $50 billion worth of direct investment to transportation and other infrastructure projects, with most of the money spent ($50 to $27 billion) on dedicated highway restoration and repair. According to a draft of the legislation this plan can be paid for with a small 0.7 percent surtax on income over $1 million a year.  Most economists agree that the American Jobs Act will provide immediate jobs for so many of the unemployed in this country, as well as, add to the much needed business growth of our economy.
According to the Bureau of Labor Statistics, “the number of mass layoff events in September was 1,189, not seasonally adjusted, resulting in 117,232 initial claims for unemployment insurance. What is Congress planning to do with the returning soldiers? Will they be added to the already growing claims for unemployment? What impact will this added burden of expenditures have on the States dwindling budgets?
What the American taxpayer wants more than anything is fairness of the income tax system; that means more and not less progressive. What is a fair tax system? It is one in which individuals with the greatest earned income pay the most. In other words, as income progressively rises, it is taxed at higher marginal rates. However, no fairness of taxation, job opportunities, or business growth, will ever be possible without a restructuring of the present congressional body.
Warren Buffett, in a recent interview with CNBC, offers one of the best quotes about the debt ceiling: "I could end the deficit in 5 minutes," he told CNBC. "You just pass a law that says that anytime there is a deficit of more than 3% of GDP, all sitting members of Congress are ineligible for re-election.
Here’s more of what Mr. Buffett suggested: *Congressional Reform Act of 2011*
1. No Tenure / No Pension.     A Congressman/woman collects a salary while in office and receives no pay when they're out of office.
2. Congress (past, present & future) participates in Social Security. All funds in the Congressional retirement fund move to the Social Security system immediately.  All future funds flow into the Social Security system, and Congress participates with the American people. It may not be used for any other purpose.
3. Congress can purchase their own retirement plan, just as all Americans do.
4. Congress will no longer vote themselves a pay raise. Congressional pay will rise by the lower of CPI or 3%.
5. Congress loses their current health care system and participates in the same health care system as the American people.
6. Congress must equally abide by all laws they impose on the American people.
7. All contracts with past and present Congressmen/women are void effective 1/1/12.
Why Buffett only pays 17.4% of his income in federal taxes: "Last year my federal tax bill ... was $6,938,744. That sounds like a lot of money. But what I paid was only 17.4 percent of my taxable income -- and that's actually a lower percentage than was paid by any of the other 20 people in our office. Their tax burdens ranged from 33 percent to 41 percent and averaged 36 percent." "People who make money with money are getting taxed at a far lower rate than people who make money by their own labor," Buffett told CNNMoney.
It is without a doubt that for the majority of Americans, the security of employment, fair wages, decent healthcare benefits, and a retirement plan for their many years of service is over, under the leadership of this congress. This failure of congressional leadership will have a devastating effect on this nation for years to come, in terms of joblessness, homelessness, and for the very poor even hunger.  Of course, not because of policy, but only because of a Congressional body that places politics and profits, over the basic economic needs of its own citizenry.
Just think about how much could be accomplished in this nation, if we had a working Congress? What we need is a congress of the people and by the people, who are willing to serve the people and not PAC committees and special  lobbyist.
Pass it on! Let’s Occupy Congress: Reformation Now!
References: Crippen, Alex, Warren Buffett's 5-Minute Plan to Fix the Deficit, CNBC Interview - Published: Thursday, 7 Jul 2011 http://www.cnbc.com/id/43670783/Warren_Buffett_s_5_Minute_Plan_to_Fix_the_Deficit
Posted by Charles and Mia Harris at 11:35 AM