At last! These are the words that filled our mind as we approach the devastated Holt community to deliver the much needed emergency supplies.  On Friday, June 10th, the drive was long and slow with the weight of the U-Haul trailer being tugged by our little V-6 Chey engine.  We were delighted to arrive only to learn that many of the Tornado families were being evicted from the shelters. It was both a happy time and a sad time for us after all of the investment made to help those families suffering from this unforeseen disaster.
The Holt center was well managed by volunteers from cities all across the United States, including youth from AmeriCorps National Civilian Community Corp., adults Sonny and Connie who members of “By the Grace of God Ministry.” Janille a local resident who has been volunteering since the Tornado hit the area, served as the manager of this site. Janille was very attentive to every detail, making sure that supplies were being distributed to those in need, verifying FEMA ID’s and assuring that families who need help got support.
﻿﻿
﻿﻿

For the many families that received help from agencies such as FEMA, United Way or the Red Cross, would only last a few weeks and there was no long-term plan, leaving many to wonder how they  would survive until recovery is complete.  Even with the cash support there were very few places open within walking distance to buy products. And since most of the poor lost whatever transportation they owned, getting to areas where shopping is available, is almost impossible.
However, we also learned that once the news media lose interest and the cameras are no longer in the area, so goes much of the support from government agencies. Some of the hard hit poor areas are still without any strategic plan for recovery.  The Holt Relief Center, we were told was the only place attempting to remain involved in assisting the victims for the long term.  The rumors were flying, as usual that the disaster needs has been met for the poor in Tuscaloosa. But, in speaking with those in the Holt community and the volunteers working at the emergency relief site, this is certainly not the case. 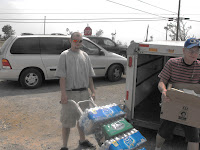 Our contribution hardly made a dent in the enormous amount of help that is needed in this area of town. But, we were so proud to see the smiles in the volunteers and families who were blessed by our delivery of emergency supplies. Even with the help, I was told that the center would be empty by the end of the day, but in spite of the challenges they promised to be there for the long term.  If it is the Lord’s Will, so will we. 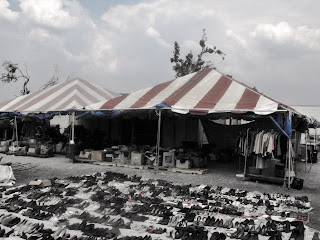 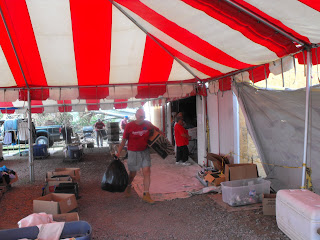 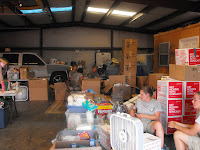 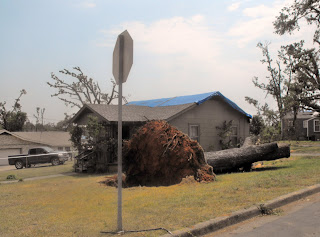 Then He said to His disciples, "The harvest truly is plentiful, but the workers are few;  Ask the Lord of the harvest, therefore, to send out workers into his harvest field."Matthew 9:37-38 (NIV) 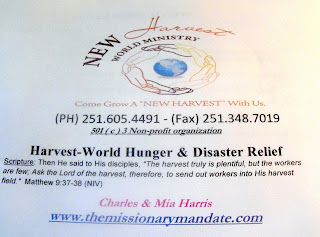 Posted by Charles and Mia Harris at 1:21 PM 1 comments

By: Charles & Mia Harris
Mission:
Our mission is to feed America's hungry through a nationwide network of partnering organizations, ministries, and volunteers engage in the fight to end hunger in America’s households by fighting hunger with hope.

Our Goals:
·         To educate those with an economic abundance on methods of supporting and sharing resources to help families suffering from financial and economic crises that pushed them into hunger.
·         To seek an understanding of the socio-political contexts of hunger in America and identify appropriate local community responses.
·         To fight hunger with hope by providing volunteers to work with local communities in developing sustainable economic development opportunities to help families recently impoverished by financial and economic crises or unforeseen disasters.
Here are the Facts:
In America there are more than 50 million people facing hunger, and with the unemployment rate still hovering near 9 percent the problem will get worst not better. A family not having enough food to sustain a healthy lifestyle is a fact to one in six Americans, including children and seniors.
The lack of adequate nutrition affects both cognitive and behavioral development in children. There are over 17 million children who are living in food-insecure households. These children are more likely to experience irritability, fatigue and difficulty concentrating in school compared to other children. This makes academic performance more difficult.  More than 2 million in rural communities experience living in food-insecure households and unfortunately these are the areas with a disproportionately high rate of persistent poverty because of a lack of food banks and other food emergency assistance to support them.
My home state of Alabama is the 2nd hungriest state in the nation and Alabama is the sixth (6) poorest state in the nation. I am truly sadden by this news and can imagine the hardships face by so many families, especially those who are living well below the poverty level.
The Census Bureau also reports that 17.5 percent of Alabamians live in poverty.  Fourteen of the tornado-impacted counties have poverty rates greater than 20 percent, including Chambers (20.7 percent), Choctaw (22.8 percent), Clarke (29.1 percent), DeKalb (21.7 percent), Franklin (21.8 percent), Greene (28.4 percent), Hale (26.6 percent), Marengo (24.9 percent), Marion (21.2 percent), Monroe (23.4 percent), Perry (31 percent), Pickens (28 percent), Sumter (35.1 percent) and Winston Counties (24.9 percent). 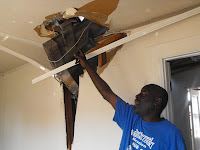 We visited the Tuscaloosa areas that were hit by the Tornado and found nothing but devastation in some of the poorest communities. One area in particular was the Roseboro Public Housing community, near Greenboro Avenue and 29th Street. There we met families whose homes were destroyed in a matter of seconds; already living in poverty from day to day and now face with a disaster with nothing left but the clothes on their backs and a few items they can recover from the rubbish of what use to be a home.
One gentleman we met home had been pierced by a 30 ft. du 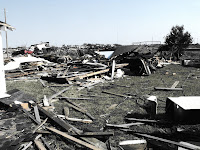 mpster top from a nearby business. The iron weighing hundreds of pounds pierced the roof of his house, came though the wall of a closet where they were hiding, barley missing their heads. But, they confessed to my wife and me, that it was the blessings and favor of God that protected them from sudden death. It was a miracle beyond anything we had ever witness and we certainly agreed with them and praised God for the victory. On Thursday, June 9th, we will be traveling back to this area to provide assistance to these families with non-perishable food items. 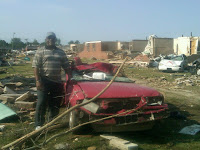 We ask for your continued prayers and support. Please consider how you can be a part in helping us to help others when they need it most!  We are committed to our mission to feed America's hungry through a nationwide network of partnering organizations, ministries, and volunteers engage in the fight to end hunger in America’s households by fighting hunger with hope. This is not the end only the beginning of our ministry.
If you have questions please call: Charles or Mia Harris at (251)605-4491 or (251) 533-1630 – (Mia). New Harvest World Ministry (501 (c) 3 Organization) "A Ministry without Walls" 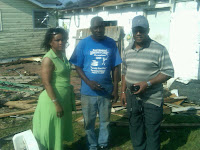 Blessings and love to all.
"The harvest truly is plentiful, but the workers are few; ask the Lord of the harvest, therefore, to send out workers into His harvest field." Matthew 9:37-38
Posted by Charles and Mia Harris at 11:34 AM 0 comments