By: Charles & Mia Harris
As we stated in our previous Blog titled: God Is A Change Agent for Missions Outreach, we shared that in January of 2011, God called us into Mission Mandate!  Not only did He call us into this blessing, He ushered us to a place and connected with a gifted people to be trained, enlighten, encouraged, energized,  and empowered with a new knowledge, of wisdom and understanding to do His perfect Will in mission outreach. This knowledge is being made possible through the instructions provided by (IGO/IWM) referred to as International Global Outreach Institute for World Ministry, and our study of the curriculum: "Pathways To Global Understanding."  This specialized training program is designed to equip believers for missions on a global scale.
There are several objectives of this assignment (1) to acquaint our readers with an understanding and knowledge about an "unreached people group."  (2) to explain how God might work in a given situation, if a sound strategy for evangelism was developed and applied;  (3) to demonstrate how God is calling us to become fellow co-workers in missions;  (4)  to further empower our personal passion for God's plans for world evangelism;  (5)  to promote the need for increased global support for missions outreach as "change agents" in proclaiming the Gospel of Jesus Christ to unreached ethnic groups and hidden societies throughout the world.
Here's a more detailed definition: an "unreached people group" is an ethno linguistic people (a people with a common language) among whom there is no viable indigenous community of believing Christians with adequate numbers and resources to evangelize their own people without outside (cross cultural) assistance.  Other researchers and mission experts have adopted the terms "hidden people" or "frontier people group." 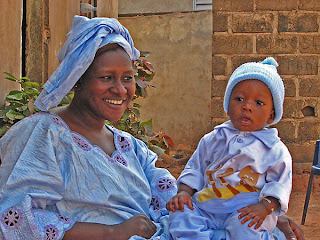 As illustrated in the picture above, the "frontier people group" (a term we prefer using in our research) we have chosen through much prayer and meditation are the "Bambara Tribe" of Mali, West Africa.  The Bambara are a large "Mande" group located mostly in the country of Mali (officially known as Republic of Mali). Mali is a landlocked nation of West Africa, with a population of over 14.5 million people, as shown in the map below.

The Bambara people live mainly in the grasslands around Bamako in the upper Niger River region of southern Mali. There are approximately 2,500,000 Bambara people.  "About half the population live below the international poverty line of US$1.25 a day.  Mali is one of the poorest countries in the world.   The average worker's annual salary is approximately US$1,500."
The Economy of Mali is based to a large extent on agriculture, with an overwhelmingly rural population, many of whom are farmers are engaged in subsistence agriculture.  "Subsistence agriculture is self-sufficiency farming in which the farmers focus on growing enough food to feed their families."  Their main crop is millet, along with sorghum and groundnuts which they  produce in very large quantities.  Other gardens products which are grown by the Bambara peolple are maize, cassava, tobacco, and numerous other vegetables are grown in private gardens as well.  They also raise various animals, such as, cattle, horses, goats, sheep, and chickens. This allows them to give attention to farming for the period of the short rainy season.  At other times during the seasons they will hunt ostrich, boar, antelope, and guinea fowl for their meat and skins. They also gather large amounts of honey from wild bees. Both men and women share the farming duties.  "Nevertheless, the wives frequently get in the fields later and leave earlier than the men. This gives them time to prepare the morning and evening meals. Children between the ages of 12 and 14 also help with the family's work, leading the oxen as they plow and guarding them during rest periods." 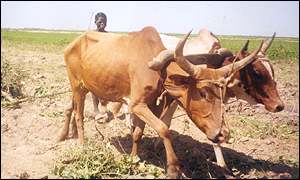 Gold, livestock and agriculture amount to eighty percent of Mali's exports.  Mali is endowed with bauxite, copper, diamonds, gold, gypsum, iron ore, kaolin, limestone, lithium, manganese, phosphates, salt, silver, uranium, and zinc, but not all deposits are being exploited, and some may not be commercially viable. The mining industry in Mali has recently attracted renewed interest and investment from foreign companies. Gold and phosphate are the only minerals mined in Mali although deposits of copper and diamonds do also exist.

Mali's  gross domestic product (GDP - market value of all goods and services produced) has risen and in 2002, the GDP amounted to US$3.4 billion, and increased to US$5.8 billion in 2005, which amounts to an approximately 17.6% annual growth rate. Mali’s economic performance is fragile, characterized by a vulnerability to climatic conditions, fluctuating terms of trade, dependence on ports in neighboring countries. 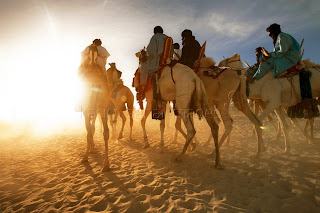 Mali's climate ranges from subtropical in the south to arid in the north. The country is mostly dry, with 4–5 months of rainy season. January is the coldest month, with temperatures ranging from (60.8 to 91.4 °F), and April is the hottest month, with temperatures averaging (93.2 to 102.2 °F).  The driest months are December and January with zero rainfall. The wettest month is August, which averages  (8.7 in) of rainfall. Most of the country receives negligible rainfall, and droughts are a recurring problem. During dry seasons, a hot, dust-laden harmattan haze is also common.  Flooding of the Niger River occurs regularly in the rainy season usually during the months of  June/July–November/December.
It is our hope and fervent prayer that as we share this knowledge and study with our listening audience that the Lord will further enlighten not only our hearts and spirits, but that He will also open our spiritual eyes to see the "harvest fields" that are now ripe for the cultivation of the Gospel. Of course, our continued prayer as ministers of Christ is to be a blessing like the prophet Abraham of old, not in mere words written on a page, but in measurable deeds of agape' love, participating obedience, and active sacrifice.

We are firmly convinced that "God is up to something in the world today." Truly, "He is bringing us together, so that He can send us out," as stated by Glenn Hatcher in his book titled: "Why God Thinks He Can Use You." And we affirm and believe, that with the support of IGO/IWM, and our primary ministry efforts of focusing on unreached persons, we acknowledge our alignment with the teaching of Christ and model ourselves after Jesus our Saviour, who declared: "they that are whole have no need for a physician, but they that are sick: I came not to call the righteous, but sinners to repentance" (Mark 2:17).
We pray now, in the Name of Jesus, that this research journey will begin our  mission destiny afresh in sharing the good news of the Gospel of grace to an "unreached people" such as the Bambara people of Mali, West Africa. Knowing that without Christ we can do nothing and He must remain the center of the journey, because He is the vine and we are the branches. Therefore, we give God (Yahweh Roph' eka) who is a healer of nations, all the glory, and all of the honor and every part of our praise.
In our next several Blog's, our plans is to share with you what we have learned about the Bambara people, their background information, highlighting their remarkable history, including language, daily life, social structure, political system, and the religion system of this tribal people.
Mt. 9:37-38 - Then he said unto his disciples: "The harvest is plentiful but the workers are few. Ask the Lord of the harvest, therefore, to send out workers into his harvest field."
To be continued......
Posted by Charles and Mia Harris at 4:06 AM